Back in August, the IRS issued a proposed rule on federal charitable contribution deductions under state tax credit programs. For a refresher on this rule and its implications, see our previous post on the topic. For those just tuning in, the short version is that the IRS is considering a regulatory change that would forbid donors from receiving both a state tax credit and a federal charitable contribution deduction for the same gift.

The federal rulemaking process is a complicated one, as you can see below. The process for this rule has been slightly different because of a special agreement reached between the White House Office of Management and Budget and the Department of the Treasury regarding the implementation of the Tax Cuts and Jobs Act. 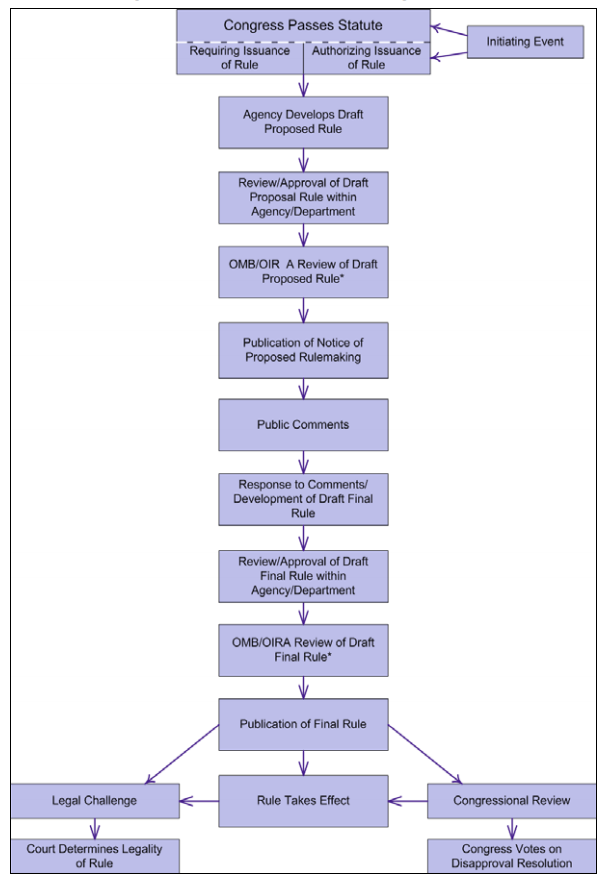 The public comment period (about halfway down the chart) on the proposed rule officially ended earlier this month. All told, nearly 8,000 individuals and organizations submitted comments on the rule. Unfortunately, many of these comments were submitted by opponents of parental choice in education—opponents who are thrilled at the prospect that the proposed rule could damage longstanding scholarship tax credit programs.

The negative comments tended to follow a template that offered little in the way of practical input. Instead, they thanked the IRS for the “ending of a tax shelter that allows taxpayers to turn a profit when they fund private schools through state tuition tax credit programs.” While there is a valid argument to be made that donors should not be able to “profit” from charitable contributions, these folks fail to mention that the scholarship programs they are targeting serve nearly 300,000 students nationwide.

Opponents were not the only ones who showed up to make their voices heard. Dozens of organizations and hundreds of individuals who support or benefit from scholarship programs submitted their own comments. Many of these comments criticized the IRS for failing to distinguish private charities from government-run workaround entities. Others offered substantive suggestions on how to avoid harming disadvantaged scholarship students as the rule moves forward.

ACE worked with its partner schools and scholarship families in Kansas and Louisiana to submit hundreds of comments asking the agency to consider ways to mitigate negative impacts on scholarship students. ACE also submitted a more detailed comment to the IRS making the following points:

The IRS is currently reviewing comments on the rule, and will hear direct testimony on the issue at a Nov. 5 hearing in Washington, D.C.  After that, the agency will begin revising the rule into its final form before another round of review. ACE will continue watching the process closely as the rule moves toward finalization.

The U.S. Census Bureau isn’t exactly known for providing data in an attractive, easy-to-understand format. You can imagine the surprise, then, when the federal agency released its slick new Opportunity Atlas this morning.

The Atlas tracks 20 million Americans from childhood to the present (when those same people are in their mid-30s), then offers a visual depiction of how outcomes differ across geographic areas. Notably, this map is not showing you what is currently happening in a given area. It is showing you what happened to those who began their lives there so many years ago. You are essentially looking at the origin stories of 20 million Americans. The resulting picture is profound.

In a statement, Census Bureau Deputy Director Ron Jarmin said, “The Atlas has great social significance because no one has ever had access to social mobility estimates at such a granular level.” That assessment certainly seems to be true. The Census Bureau has long provided a plethora of data points on counties, cities, and states, but it has never released anything as geographically detailed as this tool.

Zooming in on a city provides a color-coded view of individual neighborhoods. The various colors indicate what happened to the children who grew up there decades ago. You filter by income levels, incarceration rates, high school and college graduation rates, and a variety of other statistics, all of which can be disaggregated by various demographic variables. It’s both fascinating and sobering to see the outcomes of so many lives reflected this way—and to see the enormous differences in life outcomes between children raised just a stone’s throw apart.

The visual representation of disparities in opportunity would be powerful enough on its own, but the Census Bureau has also adopted the uncharacteristic approach of taking a more active position and calling for change.

A formal study released alongside the tool explicitly states that “Policymakers can use these data to better target programs that aim to improve economic opportunities for disadvantaged children by pinpointing the areas within cities that currently have the weakest outcomes.” And the tutorial for the tool itself says, “ZIP code isn’t destiny, but too often it has limited children from reaching their full potential. By understanding how opportunity varies within and across communities, these new data can help identify solutions to improve outcomes for all children.”

There may be some who don’t agree with the Census Bureau’s more active stance on social mobility, but it is difficult to look at the disparities between neighborhoods and not draw the conclusion that something must be done.

While the agency stops short of calling for any specific policy solution, we at ACE know that one of the key ways to equalize opportunity is to expand access to a high-quality education. This new tool is an excellent reminder that much work remains to be done.